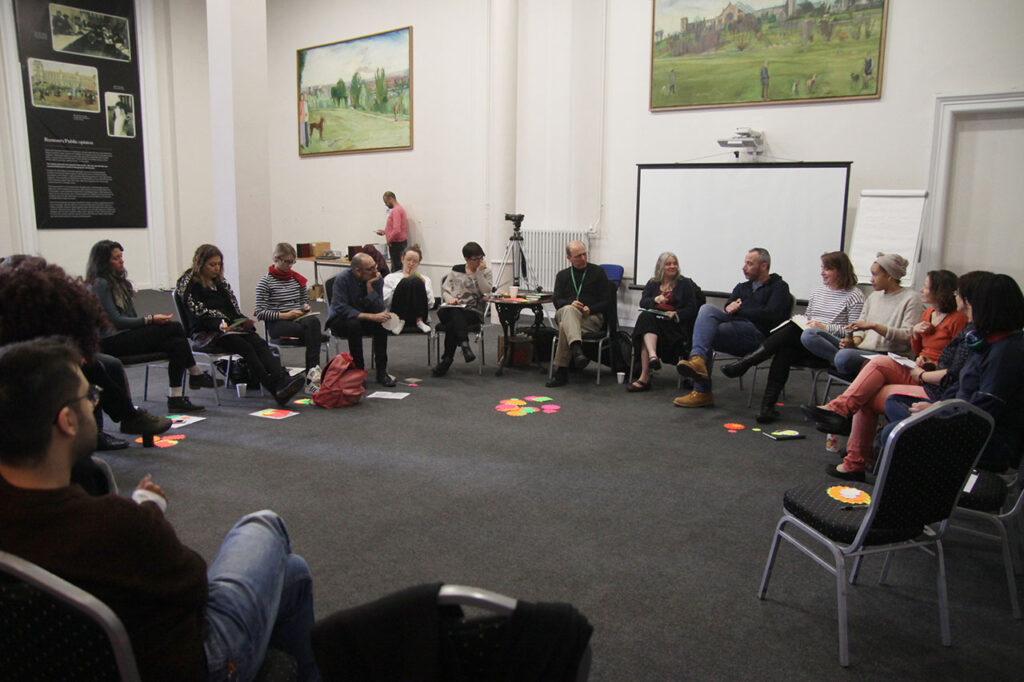 Participatory Theatre, which engages with and is ultimately made by marginalised communities (including those who do not speak the main language of the space they inhabit), is very different from mainstream, professional theatre*. One of the reasons our company is called Border Crossings is because our participatory work enables a dialogue between people who are often considered outsiders, and the society in which they live. Precisely because Participatory Theatre is non-professional, and so not commoditised, it presents a challenge to the transactional norm which makes even the most politically charged professional performance comparatively familiar and comfortable. A performance made by marginalised people who live alongside us, and which constitutes a statement of their presence among us, is a statement of their own sense of social and political responsibility, and so implies the need for the audience and the wider society from which they come to accept a reciprocal obligation. As François Matarasso has argued: “The effect is to make us more aware of our own assumptions, choices and responsibilities. Participatory art reminds us that we are alive and that our lives matter.”**

Border Crossings’ approach to participatory performance-making is a constantly evolving, fluid methodology that responds to the specific needs and desires of the particular communities we are working with. MORE THAN WORDS highlights groups who have limited or no knowledge of the local language: primarily refugees and migrants who have arrived comparatively recently from overseas. The project therefore complements our work around refugees in the Erasmus + project THE PROMISED LAND***, laying particular stress on an approach to theatre-making that does not prioritise language, but which enables stories to be told and emotions to be expressed and invoked through the body, imagery, sound and music.

The various techniques offered in the Training Module are ways in which facilitators can enable participants to be theatrically creative. However, they do not in and of themselves make theatre. Performance-making requires a long period of engagement with the participants, and the building up of mutual trust over time. The exercises can be useful in creating moments of theatrical power: but it is then essential to evaluate these critically, in close dialogue with participants, and to structure the material so as to present a coherent and meaningful presentation on which all those involved are agreed. This is another way in which Participatory Theatre is of deep political value: it offers a small-scale version of the way in which an ideal democracy might function. In crossing borders, we walk into a new realm of possibility.

We use cookies to make sure you can have the best experience on our site. If you continue to use this site we will assume that you are happy with it.OkNoPrivacy policy